Peking opera is actually a hybrid of many regional Chinese operas emerged 200 years ago, that became hugely popular. As it has incorporated elements from a broad spectrum of other operas, it is noted for its inclusiveness and is an excellent representative of Chinese operas. 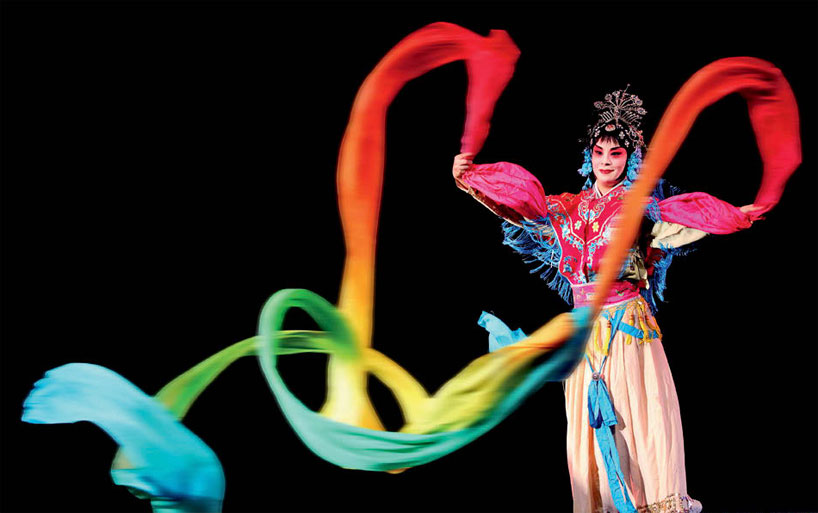 Doctoral Supervisor in Chinese traditional opera direction at Chinese National Academy of Arts
Lecture to commemorate the 10th anniversary of the Confucius Institute.

Chinese operas and ballads, with Peking opera as a typical example, are rich in content. Apart from entertaining people, they have always had a didactic function, eulogizing various good deeds. The Chinese character for ‘opera’ is 戏 xì , which was originally written as 戯, consisting of 虚 xū ‘false; fake’ and 戈 gĕ , a pictograph originally written as representing a weapon with a long shaft. So 戏 xì literally means ‘performing with a fake weapon’ to tell important stories. The character 曲 qu means ‘singing’. Why is it necessary to sing out the story? Because our language is complex – there are over 200 syllables and each of them has four tones, píng ‘level’, shang ‘fall-rise’, qù ‘fall’ and rù ‘entering’ – with different tones carrying different meanings, like a beautiful piece of music. Chinese operas and ballads feature a combination of music and image that is beautiful and unique.

Peking opera, a relative newcomer, is actually a hybrid of many regional Chinese operas. About 200 years ago, several excellent theatrical troupes of different local operas in Anhui came to Beijing to perform, which was referred to as ‘four major Hui troupes entering Beijing’. They made quite a number of adaptations and improvements in their performances to cater for the taste of a broader audience. This new form of opera became hugely popular in Beijing and won the name Peking opera, for in the Wade-Giles system of Chinese phonetic spelling Beijing used to be spelled Peking. Peking opera is a fusion of accents, featuring Wu (centring around present-day Suzhou), Henan and Beijing dialects. As it has incorporated elements from a broad spectrum of other operas, it is noted for its inclusiveness and is an excellent representative of Chinese operas.

Chinese operas and ballads feature a combination of music and image that is beautiful and unique.

There are different roles in Peking opera, like shēng, dàn, jìng, chǒu . Male characters are called shēng, female characters dàn. What does dàn mean? A long time ago, women were not allowed on stage, so female characters had to be played by men. When they went on the stage, with thick and strong arms and legs, it was clear that they were not women. So they had to perform in the evening. The antithesis of performing in the evening is performing in daytime, and daytime in literary Chinese is dàn . That is how female roles got the name dàn . The term jìng ‘clean’ is also the result of antithesis, because the characteristic of jìng characters is that their faces are painted with patterns of bold colours, which are anything but clean. Chǒu ‘ugly’ does not mean ugly either. In fact the role of chǒu in Chinese opera is special and hard to define. Sometimes it is realistic and serious, sometimes unrealistic and clown-like.

Performances of Peking opera comprise of visual, vocal, acrobatic elements, etc. Take the act of pointing for instance. In everyday life we can point in any way we like, but in Peking opera there are stylised ways of pointing. A shēng character points by sticking out the index and middle fingers together. Yet a dàn character points by touching the middle finger with the thumb and sticking out the index finger while keeping the arm straight to convey the feminine beauty of being slender, especially while sticking out the little finger. 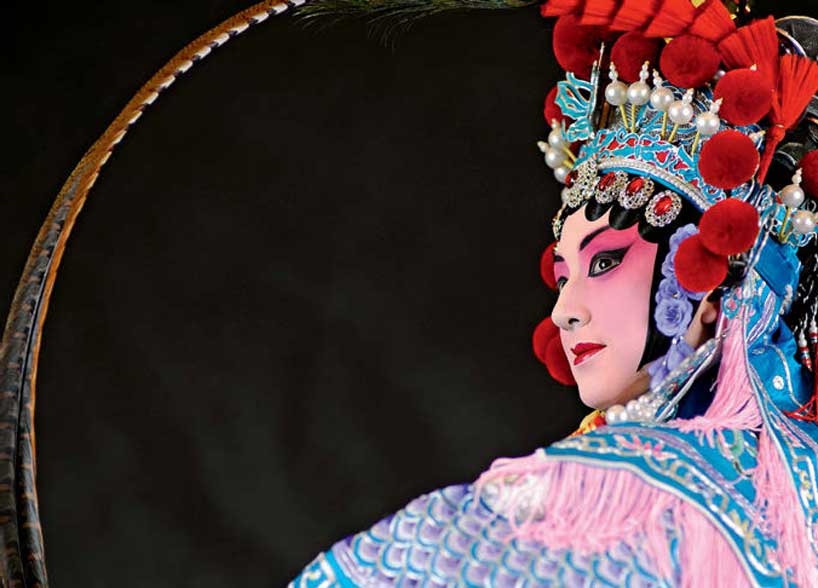 There is a set of routines in Peking opera performance. When a player goes on stage, the curtain is not raised. Instead he or she walks onto the stage and stands in a certain posture to show the audience what role he or she is playing. There are certain ways to present oneself as a scholar or a warrior, like how to tidy up the sleeves. The seriousness, or elegance, or strength of the character is fully revealed through the movement of the body. Then the player utters a line in an appropriate manner to disclose the plot, which is called yǐnzi ‘prologue’. The prologue does not have a music accompaniment except for the drum, whose beat accompanies the movement of the player. In the play Ma Cao ‘Calling Cao Cao Names’, for example, the lead character Mi Heng makes abusive remarks in his prologue about Cao Cao, a warlord in the Three Kingdoms period (AD 220-280), indicating what he thinks of Cao and what kind of person he himself is. That is basically the main plot of the whole play. After the prologue, the actor would turn around, sit down, and read out a poem – dìng chǎng shī ‘an audience silencing poem’ – to make the audience quiet down and introduce the character Mi Heng, before the play starts. To introduce the character first and then move into the play proper is a stepby- step routine peculiar to Chinese operas. 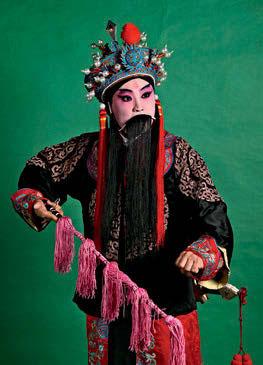 The vocal part of a Peking opera performance takes two forms: chàng ‘singing’ and niàn ‘singsong’. Singing is usually accompanied by the huqin , a two-stringed musical instrument, while singsong takes the form of either a rhythmic monologue or dialogue, but not set to a tune. The artistic skill of a player is therefore evident in his acting, singing and singsong abilities. In one of the Three-Kingdom plays, for example, after Guan Yu and Zhang Fei died, their big brother Liu Bei felt very lonely. Devastated by the loss of his two sworn brothers and by the setback of his ambition to unify China, he desperately needs to express his feelings, yet he cannot do so by simply weeping and sobbing, so he reminisces by singing. As he sings “my good brothers”, you get the feeling that, although he is singing a song rather than simply crying, the tune sounds like crying, with twists and turns and rises and falls. The singing of the word de in “gū de hǎo xiōngdi ” lasts quite a while, first rising up in pitch, then falling down, and rising again, all to achieve the effect of catharsis. The same is true when happiness is expressed through singing and singsong, giving full play to the expression of the characters’ feelings in the play. Put simply, Peking opera expresses the emotions of characters through singing, singsong, acting and acrobatic fighting so that they can be understood by a wide audience.

In ancient China, people did not think much of acting and actors, regarding acting as not being a proper profession. The children of actors were not allowed to take the qualifying examination at the county or prefecture level to become a xiucai, or taking the imperial examination held at provincial capitals to become a juren, let alone taking the final examination at the imperial court to become a zhuangyuan ‘the national champion’. But a great many people, including the royal family living in the imperial court, loved operas, where they would sing a tune of two at their leisure. Even some of the emperors took a liking to it, showing that Peking opera was irresistible. In modern times, an overseas Chinese who cannot sing erhuang ‘the Huanggang and Huangpi tunes of Peking opera’ is often considered not a proper Chinese person. 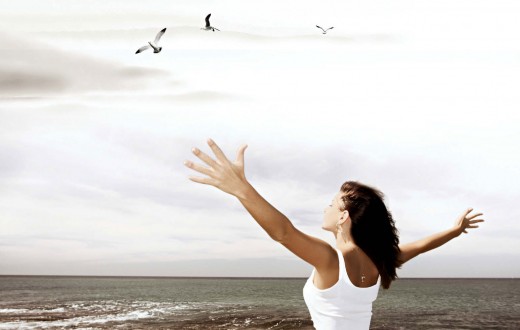 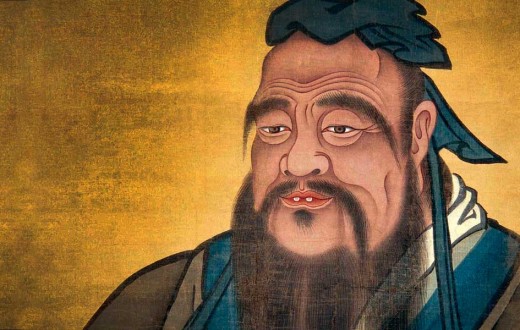