The Longmen Grottoes complex is the largest in China, with more than 2,300 grottoes. The grottoes and niches at Longmen are an outstanding manifestation, in the largest scale, of the finest sculpture from the late Northern Wei dynasty through the Tang dynasty. Elaborate depictions of motifs in Chinese Buddhism, these works of art represent the summit of Chinese stone carving.


Sun Ying
Zhou Xinhua
本刊记者 孙颖 周新华
You may have stood in front of the Parthenon admiring its grandness, and you may have found yourself falling under the spell of Mona Lisa’s smile; however, when you stand in front of the five-story-high statue of the Vairocana Buddha, you will perhaps experience another extraordinary feeling, for what meets your eye is a perfect integration of grandness and grace.

When Europe was entering the lengthy Middle Ages, far away in the East, China was striding into an age of prosperity. During the Tang dynasty, China experienced economic development and reached a peak in culture and arts. Begun during the Northern Wei dynasty and mainly completed in the Tang dynasty, Longmen Grottoes are one of the four greatest grotto complexes in China, the other three being the Mogao, the Yungang, and the Maijishan Grottoes. With more than 2,300 grottoes, the Longmen Grottoes complex is the largest in China. Confucius Institute reporters take you to Longmen so that you can experience the unique fascination of this world cultural heritage.

To preserve a thousand-year-old piece of Tang dynasty porcelain seems hardly possible, but here, history earlier than Tang is available to touch and feel.

Twelve kilometers south of Luoyang, is a nine-dynasty ancient capital situated in western Henan Province, through which quietly flows the Yi River between two mountains that together look like a gate fashioned by nature. The mountain on the west side of the river is honeycomb with grottoes of various sizes. In these grottoes are carved Buddha statues in all kinds of postures, sitting or standing.

The grottoes of Longmen, formerly known as Yique (Gate of the Yi River, can be traced back to 493, when Emperor Xiaowen of the Northern Wei dynasty (a dynasty before Tang that was founded by the northern Xianbei people in 386 and lasted till 557) moved the imperial capital to Luoyang from what is now Datong, Shanxi Province.

The River Yi flows quietly between the verdant mountains. Perhaps everything here, except for the meandering stone stairways on the mountainside, still looks the same as it did a thousand years ago. Here, time seems to have stopped.

Yu Qiuyu, a scholar of Chinese culture, says: The Tang (618-907) was a splendid dynasty in Chinese history. The Longmen Grottoes complex shows a Tang dynasty outside of poetry, one that is carved in huge rocks.

A SUMMIT OF STONE SCULPTURE

Right after graduating from Peking University with a degree in archeology, Li Lan came to Luoyang and became a researcher at the Longmen Grottoes Institute. To most people, archeological research of grottoes is a tedious, lonely job, but the twenty-something Li Lan thinks differently.

Starting from the time when Emperor Xiaowen moved the capital to Luoyang, construction and repairs of the Longmen Grottoes, often interrupted, lasted almost five hundred years through the Sui, the Tang, and Song dynasties, resulting in the over-1000-meter-long spectacle that we see today. Most of the grottoes here were constructed in the Northern Wei and the Tang dynasties, with the Tang dynasty accounting for 60%.

Before we realize it, we have arrived in front of the Fengxian Temple. We walk up the stairs to a huge cave, which is the largest and finest of the Longmen Grottoes and one that is most representative of the artistic achievement of Tang dynasty stone sculpture. Right in the middle of the cave’s back wall sits upright the largest statue at the Longmen Grottoes – the over-17-meter-tall image of the Vairocana Buddha.

Although we have heard about the grandeur of the Longmen Grottoes before, when we actually find ourselves right at the foot of the five-story-high Buddha we were too awestruck to look straight up to her.

“‘Vairocana’ means ‘illuminating’. This image of the Vairocana Buddha has ears taller than a man. One time I got a chance to look at it from a horizontal viewpoint, and I felt overcome with an awe that I will never forget.” Li Lan says that the edifice was sculpted with a view to perspective, for the Buddha’s face looks a little out of proportion when viewed horizontally but in perfect proportion if viewed from below.

As we walk on the stairways through the caves on the side of the West Mountain of Longmen, we cannot stop wondering how, in an age when technology was not so developed, it was possible to carve grottoes and sculpt a rich variety of Buddha images in such hard stone walls. This would be a remarkable feat even for modern people, and yet it was accomplished by the hands of people who lived 1,500 years ago.

At the end of the year 2000, the Longmen Grottoes complex was inscribed in the World Heritage List. The World Heritage review panel said: “The grottoes and niches at Longmen are an outstanding manifestation, in the largest scale, of the finest sculpture from the late Northern Wei dynasty through the Tang dynasty. Elaborate depictions of motifs in Chinese Buddhism, these works of art represent the summit of Chinese stone carving”.

A REFLECTION OF CHINESE CULTURE

Art often reflects the culture of a time period. Taking more than 400 years of sculpting, the Longmen Grottoes complex is a reflection of the changes and continuity of Chinese culture. Most notable are the differences in sculptural styles and techniques, which reflect the changes in aesthetics.

“From the oldest of the caves, the Guyang Cave, to the most famous, the Fengxian Temple, you can easily see how the stone carving styles changed between the Northern Wei and the Tang dynasties,” says Li Lan. As people of the Northern Wei dynasty considered a thin body to be beautiful, Buddha images of that period were mostly sculpted using flat-tip carving knifes, which tend to accentuate slenderness. The Tang dynasty, however, valued plumpness; so, Tang sculptors switched to round-tip carving techniques, creating Buddha images with a well-rounded face and body.

Sculptures of Buddha are usually masculine images that show a slight trace of feminine beauty. This particular image of the Vairocana Buddha, however, is imbued with prominent feminine features: a well-rounded face, crescent-shaped eyebrows, descending eyelids, eyes casting a downward look, and the mouth corners slightly tilted upward betraying a smile that, though held back, is unmistakably there.

This is because sculpting of the Vairocana Buddha occurred during a period when China was ruled by Wu Zetian, the only empress regnant in Chinese history. So, a story goes that the Vairocana Buddha was sculpted in the likeness of Wu Zetian. This is just a story, but it affords us a glimpse of the political circumstances of the time.

To a certain extent, creation of grottoes can be called an art of nature. “There is a lot to choosing the right site, which has to be a wooded mountain side that faces a river. The site should not be too close to a city,” says Li Lan. The Longmen Grottoes, for example, are dotted on the side of the West Mountain that faces the Yi River. Likewise, the Yungang Grottoes in Shanxi were carved into the side of the Wuzhou Mountain that faces the Wuzhou River.

It can be said that grottoes were created in relatively remote locations because monks wanted to find a quiet place to practice Buddhism, a religion that advocates a life of meditation in seclusion. However, carving grottoes and niches in natural locations also happens to be consistent with the traditional Chinese philosophy that “man is an integral part of nature”.

In addition to lifelike Buddha images, the Longmen Grottoes have also preserved a great deal of material and knowledge in the fields of the fine arts, architecture, calligraphy, music, clothing, and medicine. For example, right at the entrance to the Medical Prescription Cave, on both walls are inscriptions of more than 150 medical prescriptions for a wide range of medical problems, including both common ailments and difficult cases.

A story goes that, in the 10th century, a Japanese scholar visited the Longmen Grottoes and copied 95 prescriptions form the Medical Prescription Cave, which he later included in his Ishinpō [the oldest surviving Japanese medical text]. So, the Longmen Grottoes complex is not only a treasure house of Buddhist stone carving but also a colossal museum of Chinese culture.

A TESTIMONY OF CULTURAL INTEGRATION

More than 600 kilometers north of the Longmen Grottoes is a similar grotto complex, the Yungang Grottoes in Datong, Shanxi Province. That, too, is a masterpiece ordered by Emperor Xiaowen.

A visitor at the Yungang Grottoes might ask: “Why do we see columns here that look like the ones used at ancient Greek temples?”

In fact, this is not the only thing about these grottoes that should cause surprise, for ancient Greek culture, Indian culture, and even Middle Asian cultures, as well as the culture of the ancient Xianbei people, were all integrated here with Chinese culture.

The grotto was originally a Buddhist architectural style in India. Initially fashioned following Indian examples, building of grottoes developed from the Northern Wei dynasty and reached its peak during the Sui and Tang dynasties. Before moving to Luoyang, Emperor Xiaowen of the Northern Wei dynasty had his imperial capital in Datong. In 460, at the request of Emperor Xiaowen, Tan Yao, a prominent monk from Liangzhou (what is now China’s northwestern province of Gansu), started to carve the five grottoes that would be the earliest projects of the Yungang Grottoes.

Naturally, the Yungang Grottoes were to bear the marks of grotto carving styles typical of Liangzhou, which were the result of a long history of integration of two traditions: one from Qiuci (now Kuche, in Xinjiang, northwest of China) and the other from Yutian (now Hetian, also in Xinjiang). These two traditions had themselves been a result of integration between South Asian and Middle Asian cultures.

Although a descendant of the Xianbei people, Emperor Xiaowen did not blindly propagate Xianbei culture in China during his reign; instead, he chose to integrate it with the culture of the Han Chinese people, and was ready to embrace cultures from distant lands. Such cultural openness not only saved the Han culture from annihilation, but also made the Northern Wei a dynasty built on multiculturalism.

After moving to Luoyang, Emperor Xiaowen turned his grotto-carving attention from Datong to Longmen, which is located in central China. While inheriting the multicultural styles of the Yungang Grottoes, the Longmen Grottoes carvers made an effort to take in local elements, incorporating more techniques and aesthetics from Chinese painting and sculpture. Thus, this Buddhist art form became deeply rooted in the soil of traditional Chinese culture.

It was this bold and visionary eclecticism of the Northern Wei dynasty that laid the firm foundations for the Tang dynasty that would come a hundred years later, making it a flourishing age that has illuminated later generations. In the words of Yu Qiuyu, what made the Great Tang great was her impurity. The grottoes at Yungang and Longmen are clear manifestations of this cultural integration.

German poet Goethe said: Humankind has used its intelligence to put up one wall after another; then, with love, has pushed them all down.

Likewise, people have often drawn dividing lines between cultures, but integration of cultures has always prevailed. 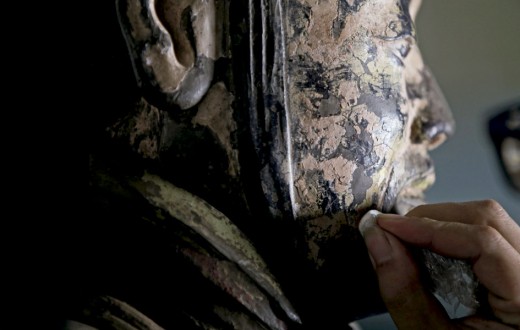 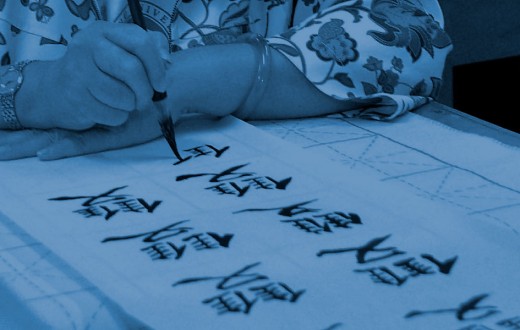 By Confucius Institute Magazine May 23, 2016